October 18, 2015
Ed and Nina Daniel had seven children:  Norris, Maxwell, Audrey, Edwin, Joyce, Jackie and Margaret.  The family lived in Amite, Louisiana and were reared with Christian values.  Life during the depression was hard for this family, but they stayed close. Even after marriages and children they saw each other often.  The cousins, children of the seven siblings, have fond memories of family gatherings. The recollections include summers of play, endless card games and shared values. Jackie and Margaret are the surviving siblings as the other five have passed away due to illnesses.

Seems that as the aging process takes hold, one is reminded of the value of past experiences and the importance of family.  Early in the year Daniel Family members gathered for a funeral.  Another one of my father's six siblings had passed away.  We noted that we never saw each other except for solemn occasions and decided to do something about it.  On October 11, 2015, the two remaining Daniel siblings and 118 of the Daniel children, grandchildren and great grandchildren gathered in Zachary, Louisiana.  There would be food, fellowship and singing. The Daniels love to sing!  Childhood memories include many sessions of gathering around a piano and belting out carols at Christmas.  Many of the cousins could and would play musical instruments.  It was noted that our grandfather, Ed, was singing a hymn on his deathbed.  That was the last memory shared of his life.

The planning began in April.  The gym of my church was reserved.  A Facebook page was begun.  Family names and contact information were collected via email and messages.  A letter was composed and the invitations went out in mid July.  Each of the 21 first cousins, their spouses and their children and grandchildren were invited.
As the date got closer many people became involved.  Cousin Steve would cook for us.  He is a minister and often cooks large quantities of barbecue for church events and he offered his expertise for our event.  Cousin Melanie offered her talents as mistress of ceremonies, song parody writer, photo booth creator and general "counsel" along the way.  Others encouraged their kids to register and to attend.

From childhood, when most of our parents were still around, the Daniel cousins knew each other.  As the family gatherings came less and less frequent we lost touch.  We had a great desire to share our memories and to meet each other's extended family.  We color coded our name tags and labeled them with the names of our parents.  That would be a good way to start.
As each family arrived and the name tags were claimed, the feeling of excitement grew.  The names of many we never had met were paired with faces and that created a lot of joy.

We would enjoy a festive meal centered around pulled pork, cajun sausages and hot dogs for the children (42 of whom were in attendance).  Each person brought a side dish.  We filled 6 eight foot long tables with food.  Food would be a focal point of our celebration.  We found out that we are great cooks.  Steve and wife, Dianne, assisted by Eric and Phillip presided over the kitchen and serving.

Food was another way to connect as we discussed the culinary delights.  Our meal was preceded with a family blessing.  We thanked God for the food we were about to eat and for the blessings of family and the opportunity to be together.  Alecia stated the truth in the old saying:  A family that prays together, stays together.  Hands were held and it was a very special moment.

After our meal we remained seated to enjoy a program presented by our mistress of ceremonies, Melanie.  Melanie has many talents among which is writing parodies to familiar tunes.  Cousins got on stage and took the microphones to sing jaunty and humorous lyrics to the tunes of the Addams Family, Beverly Hillbillies and Gilligan's Island.  What fun!

Melanie also organized a photo booth complete with props.  So many pictures were taken and a just a couple are shared here.  The hit was a life sized frame. 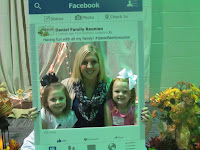 No reunion would be complete without family pictures.  The families of each sibling were assembled and cameras were clicking.  A couple of unique snaps were of the first cousins and all of the "red heads" in our family.  Nina Hughes was a redhead and that red hair is still popping up in our grandchildren and great grandchildren

There was more singing and near the end of our time together.  Bob, led the entire room in an a cappella rendition of a family favorite, How Great Thou Art.  (click the name of the song to hear the music) I believe that song has been sung hundreds of times at Daniel family gatherings.

It would be difficult to write about everything that occurred in our short time together.
Be assured there were smiles, hugs, laughter and genuine joy during the afternoon.  Thanks to every single person who attended.  Ed and Nina would have been very proud.

Here's the recipe for Frances Daniel Smith's Cornbread Salad that was requested by so many: 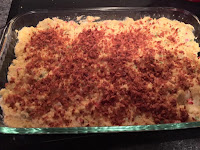 NOTE:  members of the Facebook page, Daniel Family, can view hundreds more pictures taken on the day of the reunion.