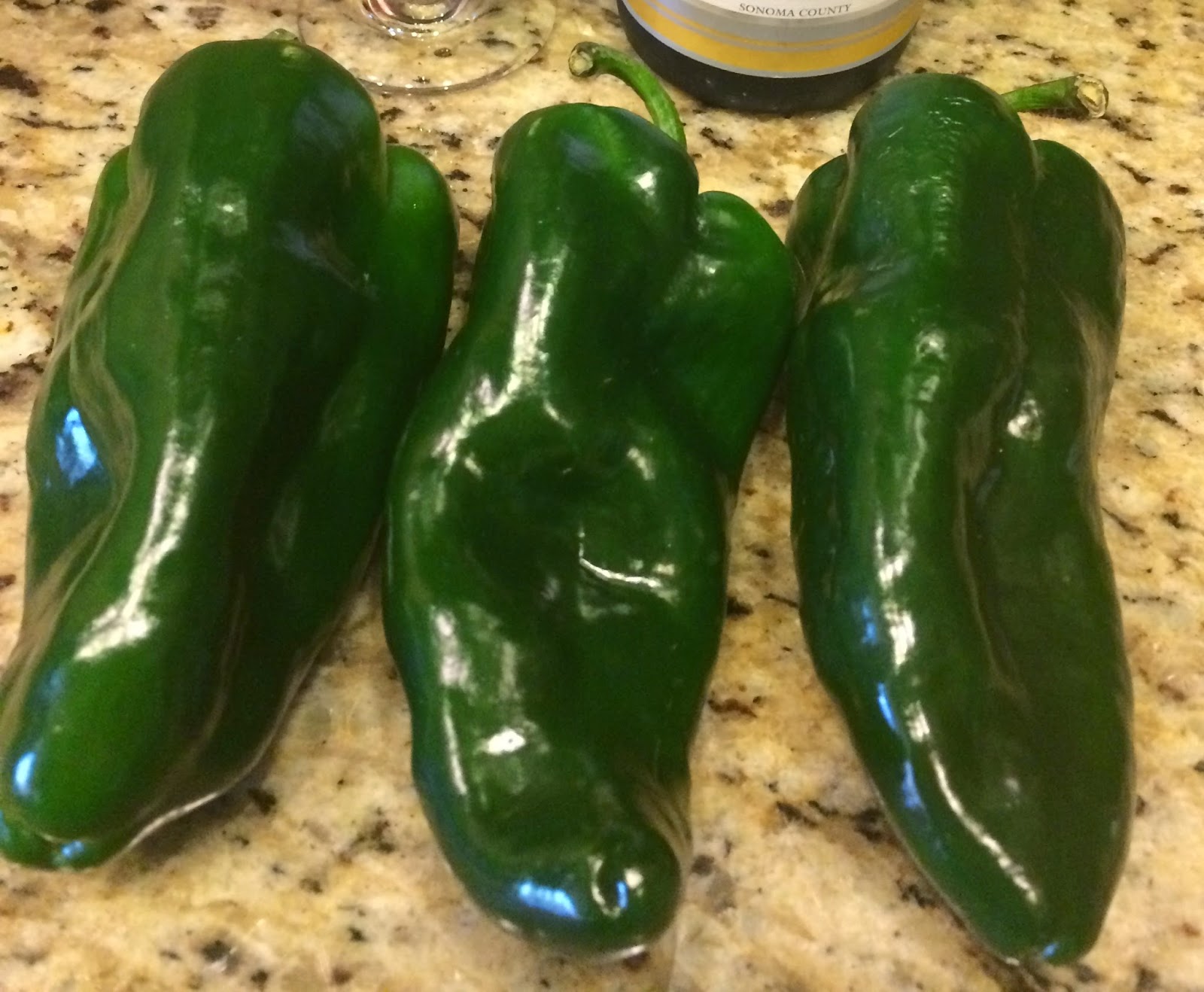 The Poblano pepper is a mild chili pepper that originated in Puebla, Mexico.  It's a large pepper and many grow to be about the size of an adult hand.  Probably the most popular way to serve this flavorful vegetable is Chile Relleno that consists of roasted Poblanos, stuffed with cheese, dipped in egg white and flour and fried until the cheese melts.  It's a common menu item in restaurants that serve Mexican and/or Southwestern cuisine.  My husband and I have become very fond of this dish and wondered other ways to "stuff" the peppers that have become readily available in our grocery stores.

I grew up with stuffed green bell peppers, since my parents grew them in a garden almost every year.  My mom would use a ground beef and rice mixture and I got to be pretty proficient with that dish.  I developed a recipe for those and it can be found by clicking this link to another edition of Weekday Rambler.  The preparation of the Poblano pepper that requires roasting and removing the skin before cooking had remained a mystery to me, but was a technique I was eager to learn.

The other day my husband came home with a sack full of beautiful Poblano peppers.  It just so happens that I have a very good resource for learning to cook with this ingredient.  My neighbor, Patti, was born and grew up in Mexico and is an expert chef!  Yesterday she was at my house and I was able to get a first hand demonstration of the roasting technique.   She showed me how to roast the peppers over the open flame of my gas cooktop and peel away the scorched skin.  She also showed me how to slit  and remove the inedible seeds without using a knife, thereby not compromising the integrity of the pepper and so it would hold its shape during preparation.

The first thing to do is to wash the peppers using a vegetable brush and drain them on paper towels to make sure the skin doesn't have excess moisture.  Leave the stems intact.  The stem is not eaten, but while roasting you hold on to the stem as the peppers are turned in the flame.  When the pepper is blistered and has a charred appearance all over, remove it from the flame and place it in a bag.  Patti said to use a plastic bag.  Some recipes I found on the Internet suggested a paper bag.  She also suggested adding a little salt to the bag and wrapping in a damp kitchen towel while letting it set for about 3 or 4 minutes.

The next step is to peel away the skin.  This is faster if you do it with a stream of water running to help "rinse" away the tiny pieces that may  get stuck to the surface.  Patti suggested the technique of using  "all of your fingers to massage the skin from the pepper.  I had a tendency to scrape and that wasn't working well.

When the skin is removed, turn the pepper to "feel" the weakest point and use your finger to "slit" a small opening.  A knife can be used but it is easier to control the size of the slit if one is not used.  The seeds will be exposed and these are also easily removed with your hands.  Every seed should be removed as they can be "heat" filled if you bit down on one while eating.  The running water can be used to rinse the pepper to get all the seeds out.

The peppers can be roasted ahead of time and refrigerated until ready to fill and bake. 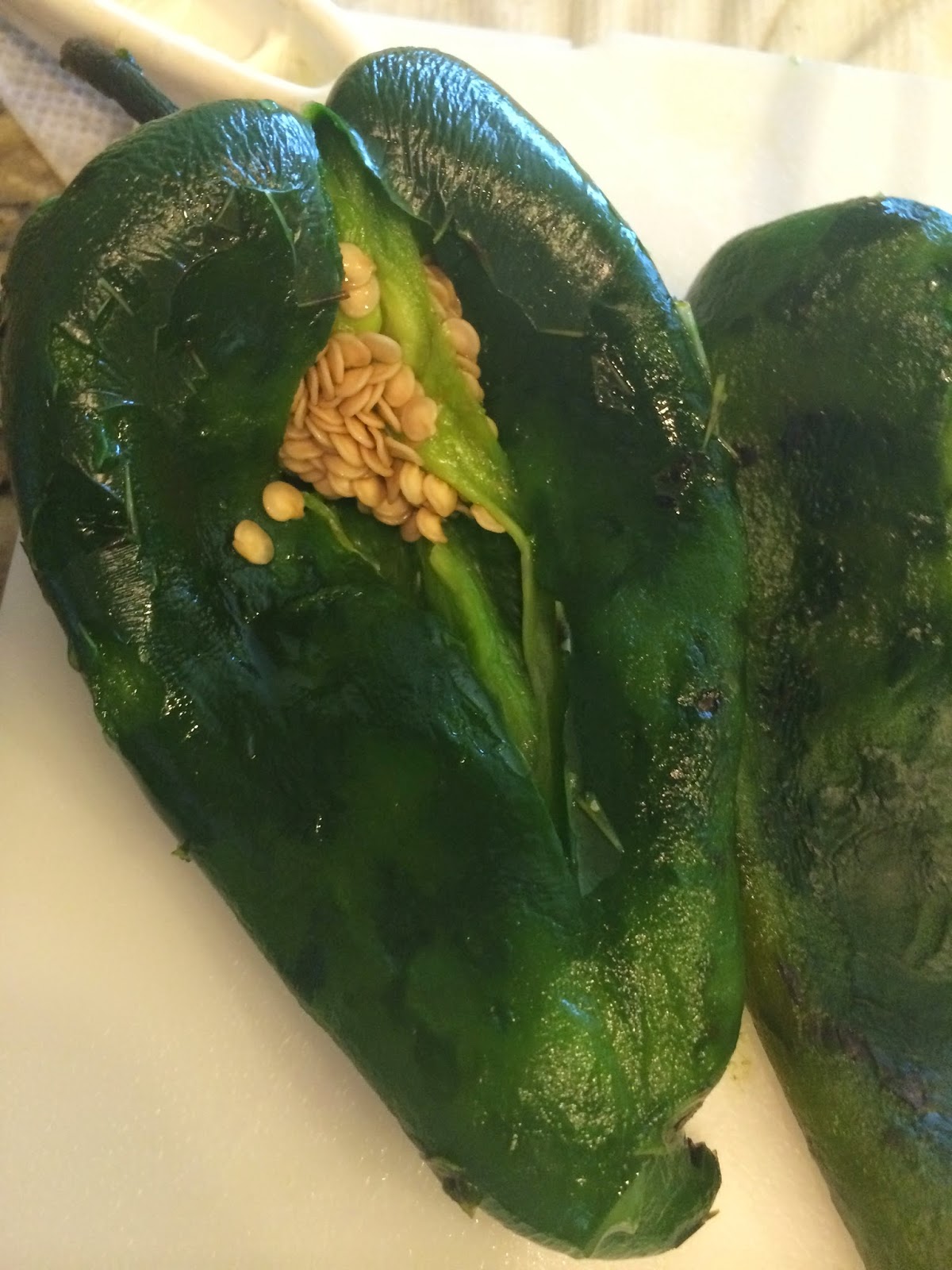 Patti's words of: "be patient, don't rush the process, be gentle with the peppers and don't burn your hand"  came to me the entire time I was preparing the vegetables for the delicious shrimp stuffing I was planning to use.  I found a recipe on the Epicurious website and I loosely followed it with a few changes to suit ingredients I had in my kitchen and to our tastes.  Here's what I came up with for the stuffing. 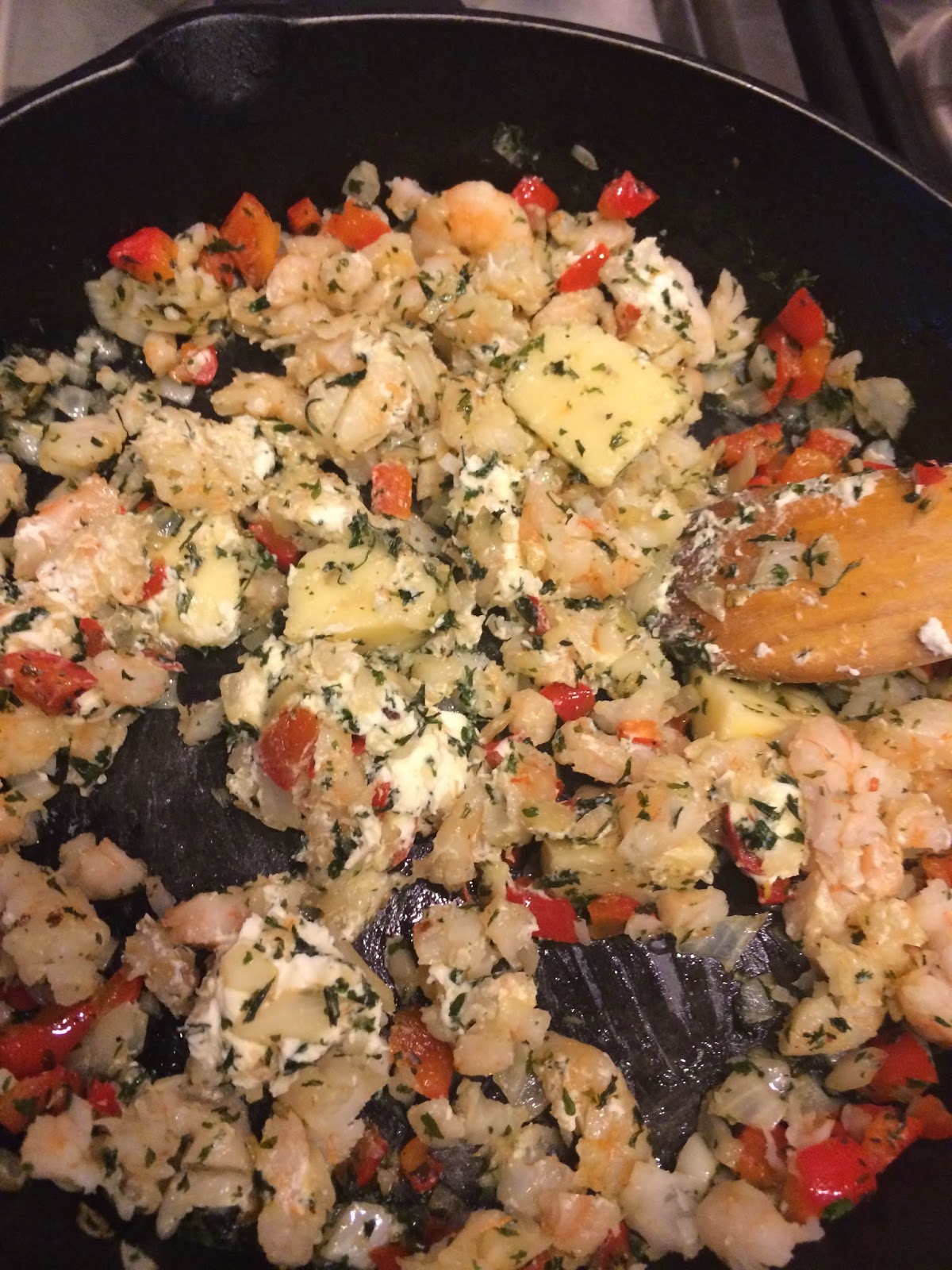 Saute the onion, garlic, cilantro, red bell pepper in the butter until tender.  Remove from heat and stir in goat cheese, shrimp and seasonings.  Spoon the filling into the cavities of the prepared Poblano peppers.  Place the peppers in a baking dish sprayed with a nonstick coating and bake uncovered for about 20 minutes or until the filling is hot.  This makes four peppers and serves two generously. 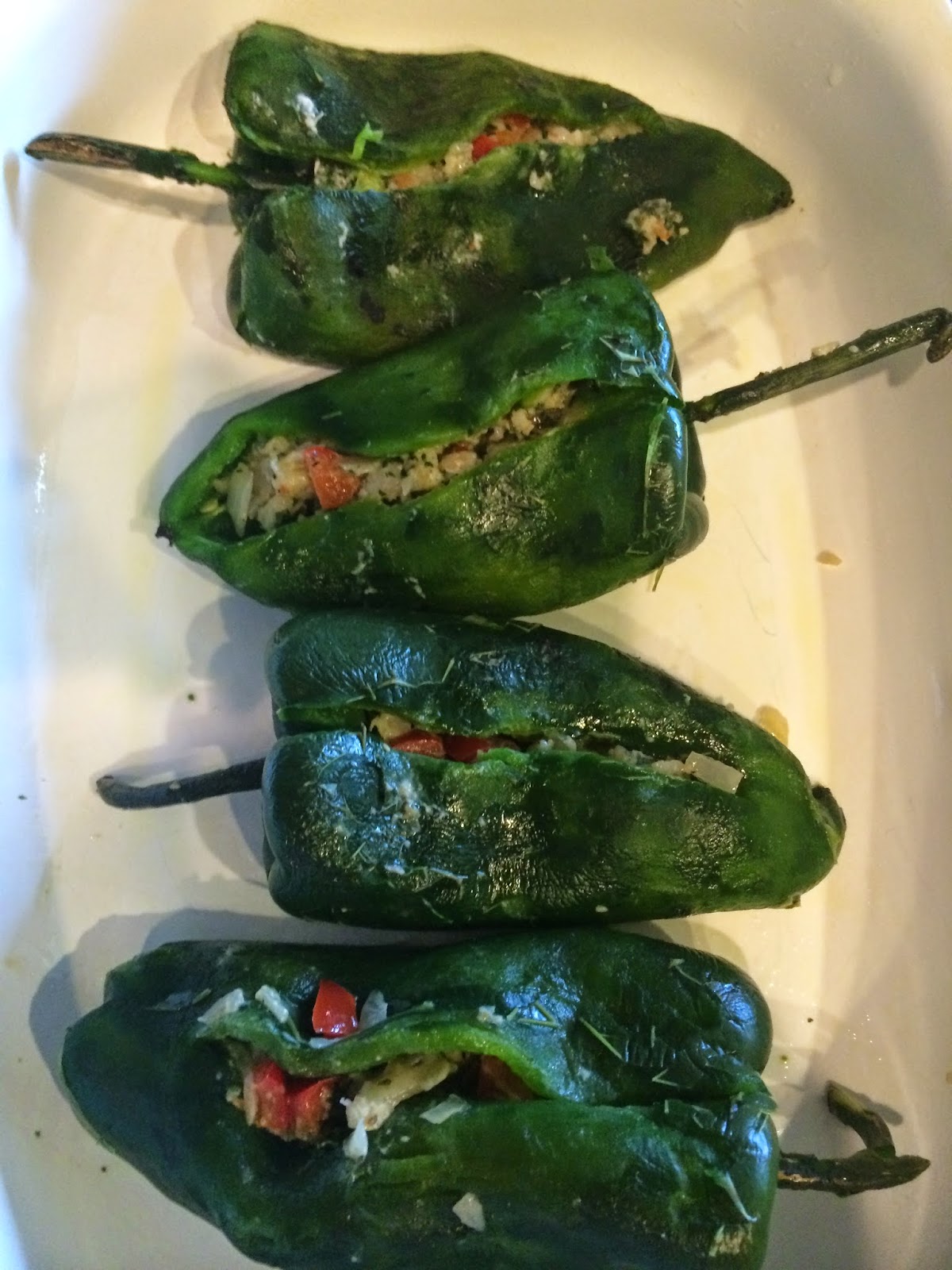 Now the finishing touch is the Red Bell Pepper Sauce that I adapted from the Epicurious recipe found at the link given above.  I altered the recipe by leaving out the step of roasting the red bell peppers and by using a scant handful of pickled jalapeño peppers instead of a fresh serrano pepper to add "heat" to the sauce.  I also used my food processor instead of my blender.  It occurred to me that I could have used an immersion blended to puree the sauce after the broth was added. 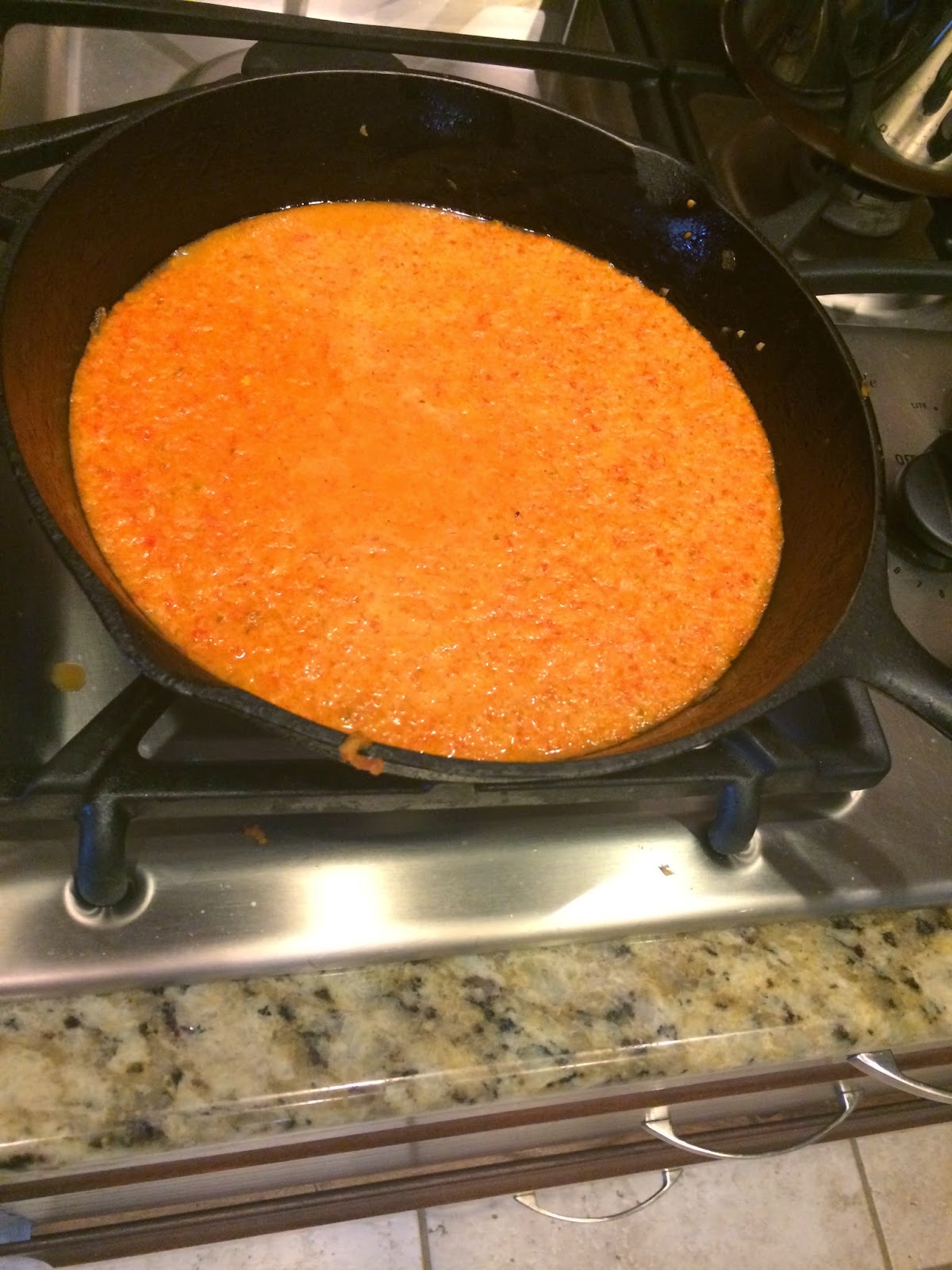 Saute vegetables in the olive oil until tender.  Add the chicken bullion mixture and puree in a blender, food processor or with an immersion blender.  Return to pan to keep warm until ready to serve 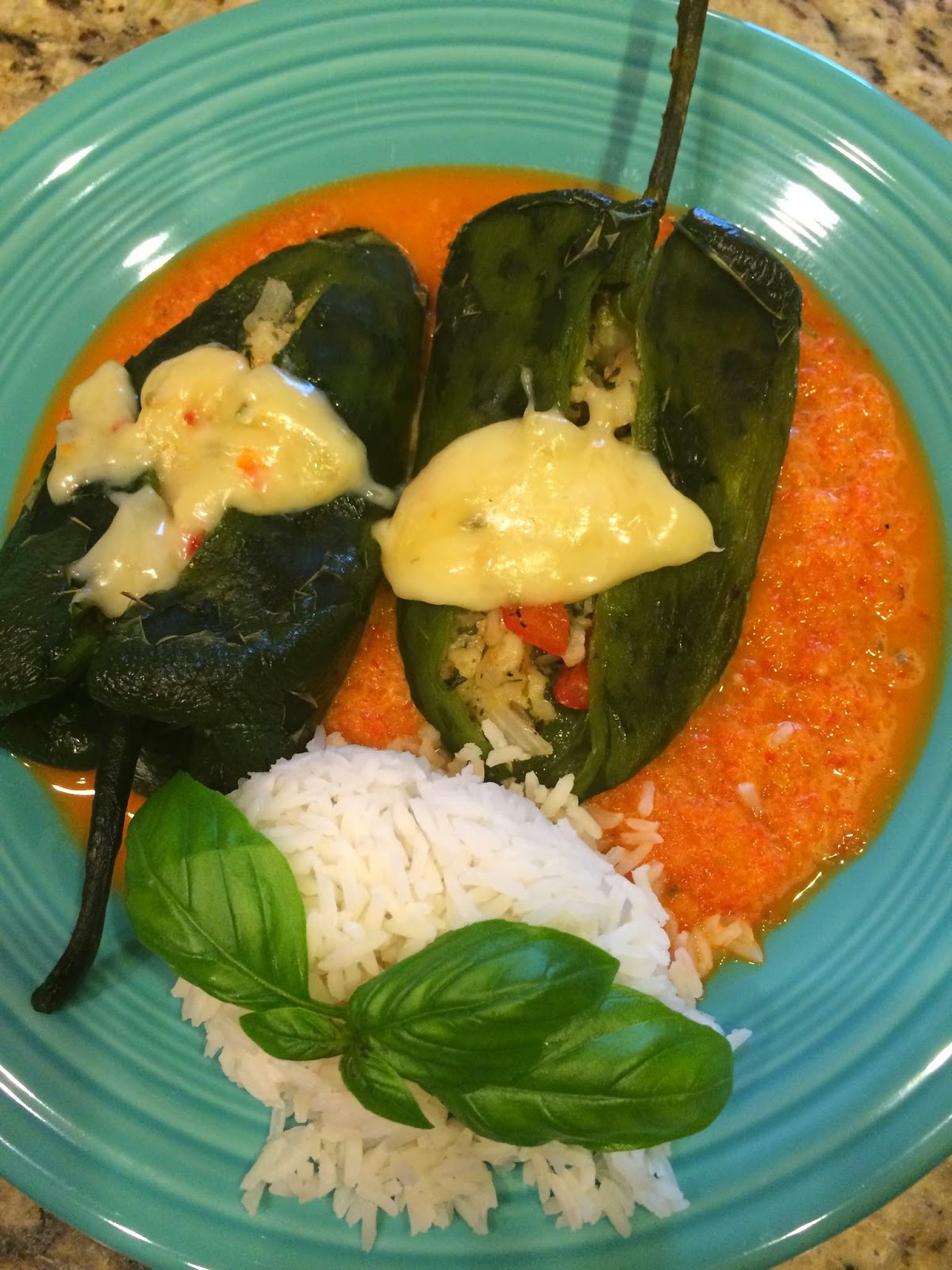 The plating can be seen in the picture.  Our side dish was Jazzmen rice garnished with basil from our garden.  I had some Monterrey Jack cheese on hand, so I melted a little with additional chicken broth for a topping before serving.

The entire process took about 3 hours, so don't attempt this on a day when you are in a hurry for a quick meal.  I do recommend that you try it as it will broaden your culinary horizons and increase your appreciation for Mexican cooking.   Thank you, Patti, for all of your help!  I am more confident now and plan to try other fillings.   Let's see.....ground beef,  chorizo, rice and cheese....the possibilities are endless.