Showing posts from October, 2013
Show all

Steve Lalande: A True Talent and a Celebrity Among Us 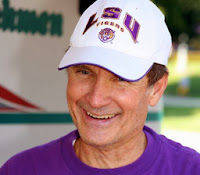 Steve Lalande Recently Runnels Theater for the Performing Arts presented Hello, Dolly!   My friend Steve Lalande posted on Facebook that he wanted his friends to come see the musical and watch him in the role of Cornelius Hackl.  A few of us got tickets and went.  It  has been great getting reacquainted with Steve from our 1960's years at Istrouma High School and a thrill to see him on stage with his surprising talents. Runnels produces a series of shows during the year including one featuring community actors and it was Steve's debut on that stage.  Those of us who attended agreed that "our own" Steve cannot only act, but sing and dance as well.  His return to Baton Rouge from 34 years of living in the Los Angeles area, was a prelude to his return to the stage.    By day he works as an Office Assistant for Taylor, Porter, Brooks and Phillips , the oldest law firm in the Baton Rouge area.  Working for the law firm is his second career.  He worked for many years
Read more
More posts