September 07, 2012
Donna and Ivy met at a club one night where she was helping to wait tables and he was the DJ.   She  grew up and lived in Seattle, Washington and was visiting relatives in Louisiana as she did each summer.  She was supposed to return to Seattle the next day.

Ivy, a Baton Rouge native, was dazzled by Donna's beauty.   He sent a flower to her during the evening.  He was smitten.  Ivy asked her out for a lunch the next day before her return flight to Seattle.  At the end of the meal, she tore up her plane ticket and the rest is history.  They were married six months later.  Fast forward twenty something years....

Abeeya's Bakery is the place for Sweetness in Zachary, Louisiana.  Donna and Ivy bought a failing business and have turned it into a successful and thriving enterprise  that  showcases  delicious cupcakes, beignets, custom order cakes, biscuits, and many other dessert items including pies and upside-down cakes.

Their entrepenurial spirit was born from adversity.  Ivy suffered a devastating injury, lost his job and they needed to get back on their feet.  They are the parents  of five children (2 biological and 3 adopted) and were about to go under financially when they decided to use their talents, determination, faith in God and an enduring desire to achieve to bring them to a rescue. 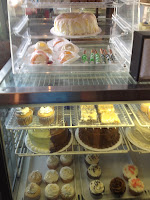 The resulting products of the home based business are some of the best tasting baked goods in Zachary, LA.  Abeeya's employs three bakers who are also expert decorators.  The staples include the above mentioned items and very large cupcakes called "Big Azz Cupcakes."  Many of their happy customers come in to the store just to buy those. The ingredients are fresh and the frosting is butter cream. The butter cream is made with real butter and is scrumptious!

The eye appeal of the goodies is such that even the strongest willpower cannot resist them.  The place smells delicious!  On the day of Weekday Rambler's most recent visit, she met Dana and Rachel who are serious about the baking and decorating.  Very impressive, indeed.

The display cases were filled with an assortment of sweets that were irresistible!  The staff likes to experiment with flavors and touts some signature flavors, such as peppermint chocolate cupcakes topped with a peppermint patty candy and raspberry filled/lemon frosted ones.  The most recent creation was a concoction called Snicktastick cake squares.  Sinfully delicious!

For those who don't have a sweet tooth (maybe one in a million people!) there are biscuits, bagels and fresh baked breads.  Wednesday is bread day and one should preorder to be assured of getting the loaf desired.

A favorite item is the traditionally southern Doberge Cake.  These are custom made to order in lemon or chocolate flavors or as a combination of the two.  This complicated dessert is a crown jewel of any Southern bakery.  She also offers wedding, birthday and other special made-to-order cakes.

Abeeya's Bakery Facebook page is one of the best places to see what is available on any given day.  The bakery has an unusual name.  When asked about it she replied that the Spanish word for grandmother is abuela.  Her Texas based grandchildren could not say the word, so they call her Abeeya.  Very charming.

The bakery is not the only fascinating aspect about Donna and Ivy's story.   She hosts a weekly radio show called The Attitude Shift  on Internet radio.  It airs each Wednesday night at 9 pm CST.  Archived episodes can be found at the above link.  She speaks to women in need of hope and healing.  She is the founder of the Broke Wives Club which meets to discuss spiritual, financial and physical problems that women may encounter.

She carries a small link of metal chain in her pocket to remind herself that we are all links in the chain of life. Sometimes one might be the one at the head of the chain pulling another person along in battles with problems and sometimes one might be the one being pulled.  She calls it "the longest tow chain of sisters" that can be imagined.  "Which ever place you are in the chain", she  added,  "the reminder is that we are all linked together for support in our daily lives."

Donna is not the only media star in the duo.  Ivy created a character called "Daddy-Man"  about which Donna wrote a book.  The Chronicles of Daddy-Man by Donna M. Butler tells of a loving father who realizes he is in competition with Superman for his children's attention and decides to become a super man himself."  The book is available through Barnes and Noble and Amazon where it has received rave reviews.  Daddy-Man has appeared on local television programs and goes on special missions occasionally upon request.  He's a role model for young boys and girls growing up in a difficult world.

Weekday Rambler wanted very much to ask for a recipe, but didn't want Donna to divulge the secret formulas that she has perfected.  The bakery is open from 7:30 to 7 daily and limited hours on weekends. For more details about the only full service, locally owned bakery in Zachary go to the website and find out how to begin "a love affair with Sweetness."  Or better, yet, go by and try it for yourself.  Have baked goods wrapped to take with you or plan to sit a while and enjoy a cup of coffee and some interesting conversation.  You won't be disappointed.