I was a teacher and been "in the classroom" for ten years.  With the birth of our first child, I took the maternity leave, found day care and went back to work.  Then the second child arrived and we followed the same routine.  Then it all went foul.  The children were seemingly always sick.  We tried to make it work until one day my husband said:  "You need to stay at home with these kids.  This is not working."  I had never occurred to me to give up my career for which I had carefully planned and studied for.  I even completed a master's degree to earn top pay at my position.


He was correct, though, so stay at home I did.  For five years I was a stay at home mom.  I took pride at homemaking and rearing the kids.  I had an immaculate home, brilliant children, supper on the table every night and a skinny body (probably from the pace I kept!).  But something was lacking.


Considering myself an expert seamstress I decided that I could augment our one salary income with my sewing skills.  I typed up a business card of sorts and took it to a duplicator for some copies to be made.  I marched myself to an exclusive local dress shop and proclaimed myself to be the "Queen of Alterations."  Imagine my surprise when a week later I was called to do a hem for someone who needed a dress right away.  For five years, I altered clothing for the shop and for word of mouth customers who needed some help. I never saw the people, but was told that I was altering clothing for the then Governor's wife and all sorts of other influential women.   When our youngest started kindergarten, I started back to my teaching career armed with some valuable lessons of what a "cottage industry" can do.


Women have for many years found work and income in using their skills offered up to those who needed those skills.  In my childhood there were AVON ladies, ironing ladies, housecleaning ladies, pie bakers (my Mom) and babysitters.  In today's world there is a new breed of young women who have found creative outlets that could also be lucrative.  I have met them all through social media.    Some have turned hobbies into businesses and some have opened businesses to serve the public.  This is not about me, but about the talented young women of today who possess talent and brains and have made a success using both!


With the advent of Etsy and Facebook it is easy to find homemade and personalized goods.  I personally found the women I am going to tell you about on Facebook, but am sure they have done much to promote themselves in other ways, too.  These brilliant young women are the relatives and/or friends of my friends, and I like to support them any way that I can. I admire them so much for having it all! 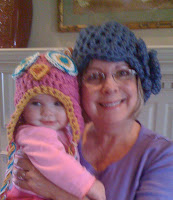 First is Annie aka The Swallow's Nest.  Annie is a seamstress and crochet artist.  She makes slipcovers, draperies, window shades, throw pillows and other home items for the home.  She also crochets the best hats.  Her Etsy page is filled with ideas to please almost anyone.  Annie is in Tennessee and works out of her home, but is so busy she has to hire helpers.  She has quite a following and now and then mentions celebrities who have purchased her designs.  I am a fan of her crocheted hats!  She will custom create whatever you would like.  This picture shows two hats Annie created for me and Olive. 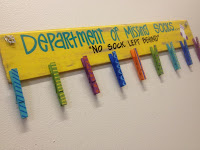 Kelly began Whatchawant Design as another cottage industry.  From her Facebook page I gleaned this:  Whatchawant Design is your one stop shop for all things fun, funny, funk, crazy, cool, custom and quite frankly, that you can't live without.  She paints and personalizes the cutest things.  Mugs, lap desks, caddies, lap desks and quirky signs are just a few of her ideas.  She is in Prairieville, Louisiana.  I happen to be the owner of one of her precious mugs that was designed just for me. 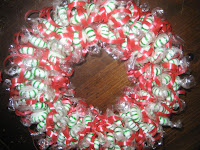 Custom Candy Wreaths is the brainstorm of Christy.  She is a former teacher, now stay at home mom, who turned a craft into a money maker.  She ties colorfully wrapped candies onto shaped wire to make absolutely precious candy wreaths.  You may remember these from Christmas past, but she has found a way to make them all colors and many themes.  She makes wreaths for all the holidays, baby showers, birthday parties and whatever else you can dream up.  Her famous nougat wreaths are known
in several states!  Custom Candy Wreaths is based in Denham Springs, Louisiana, but she ships! 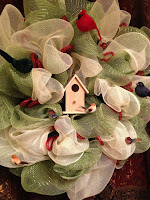 Brittany found a talent for another type of wreath.  She uses something called deco mesh to create door wreaths and wall designs.  She also has a full time job, but has turned her hobby into a way to earn extra cash and help those of us who want beautiful wreaths on our door, but are challenged in the creativity department.  Wreath'sby Brittany is her creative way to identify herself. She is making a custom order for me at this time and I have already placed my order for Christmas.  For a small fee she will deliver.  She is in
Watson, Louisiana. 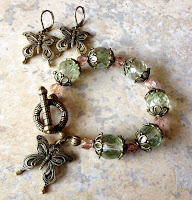 Jillry is a very successful jewelry designer.  Armed with a Fine Arts degree in Graphic Design, she wanted to have a career at home so she could have a family, too.  Jill has found her nitch in her famous online trunk shows.  The formula is brilliant.  She designs and makes hand beaded jewelry (with her own special touches), takes pictures of them and posts them throughout the given day of the show.  Her clientele of over 3000 simply leave their Paypal address under the picture of the items they wish to purchase.  She gives advance notice of the time and day and securing a Jillry original is akin to winning an Ebay.  Gotta have fast fingers to snag a Jillry accessory! 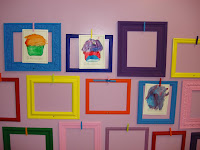 Michelle took her entrepreneur spirit one step further and rented space to open her own business outside the home.  She designed and created Pretend*Play*Party for children.  It's an interactive, educational play environment for children 0 to 8 years.  For a fee, kids can go there (accompanied by adults) and play to their hearts' content or can have a custom designed birthday party there, too.  There are all sorts of centers including a theater, reading nook, restaurant complete with menus, a castle, a toddler soft spot, a dress up center, a kitchen, an art nook and on and on.  It's become a popular field trip destination.  Pretend*Play*Party is on Range Avenue in Denham Springs, Louisiana.


I also know of some other women who have turned hobbies into money, but they are too busy and don't want any more of their time taken from their families, so I am not mentioning them here.  I will say, however, that one of them bakes the best cakes I have ever tasted.  Her fondant creations are exquisite.


It's a new breed of women and look out world.  Here they come!  They are homemaking and finding creative outlets that are helpful to others and quite unique.  I applaud them all and am glad to know them.  I feel that a torch has been passed.  Perhaps one of you will be inspired to follow a dream, too.