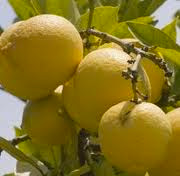 My sister-in-law, Donna, brought to us a huge bag of lemons from the tree in her backyard.  In Louisiana, this is the time for the lemons to produce.  This was the perfect gift since my hubby loves lemon in his iced tea.  He got industrious and squeezed the entire bag and saved the juice for later use.  This morning he requested that I help him "use up" some of the juice by baking a Lemon Meringue Pie like my Momma used to do. 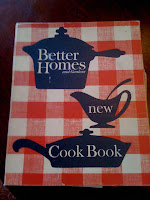 My first thought was: "Oh boy,  what a request!"  I remember my mother working for several hours at a time to produce this delight, but my Dad loved it and she persevered.   I dug out the cookbook that she had used and got to work.  The recipe stated that it takes about an hour to make the pie, so I wasn't too discouraged.   It's been about two months since we laid my Mom to rest in the cemetery next to my Dad, so I thought about her as I prepared my pie.  I remembered some tips she gave to me as I watched her bake when I was a kid.  It is important to note that the cookbook was published in 1953 and was the only one I ever remember her using.  I laughed as I opened it.  It was full of handwritten notes and newspaper clippings.  For such an old book, it is still in pretty good shape.  She used it for baking, but for everything else she had her own recipes, so I am supposing this book was taken care of well.  I don't ever remember that she bought books, so I am thinking this might have been a gift.  That question will remained unanswered. 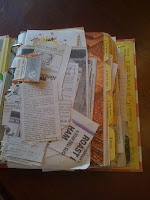 Here is the recipe for Lemon Meringue Pie by Elise with a few adaptations by Dot along with the thoughts and tips that came to mind as I was preparing it.

The first step is to organize all the ingredients.  Once beginning the filling, the timing is important. 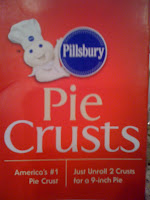 The Better Homes and Gardens book supplies detailed instructions for making a pie crust.  I do know how to make a pie crust and am pretty good at it, but I have a secret that I will now share with you.  I use ready made crusts that can be found in the refrigerator section of the grocery store.  I always use Pillsbury brand.  They cost a little more than the store brands, but they are worth it.  I have passed them off as my own for many, many years!  They can be frozen, too, so you can always have them on hand.

Prepare the crust and bake at 425 degrees F for about 15 minutes.  Remove from the oven and allow it to cool while making the filling and meringue.  Make the crust appear to be homemade by crimping the edges between your fingers.  My mom taught that crimping technique to me as she made her own crusts, but it works for me on my cheater crusts as well!  Reduce the oven to 350 degrees F.

Filling: (differs slightly from the recipe found at the link given above, but this is how my Momma made the pie according to her notes)

-Squeeze enough lemons to get 6 tablespoons of juice.  Before juicing, however, use a microplane or zester to remove the peel that will be used in the filling. (My Momma didn't have either of these, so she used the fine side of a grater) 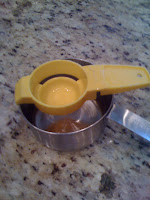 -Separate 4 eggs. The tool I use to separate the eggs is shown in the photo.  It is a Tupperware product and I don't know if they still sell it, but mine has been used many times.  It is a foolproof way to separate eggs.   Place the whites in a small mixing bowl and reserve for the meringue. Place the yolks in another small bowl and beat them slightly. (Very important:  Use a separate bowl for separating the eggs because any hint of yolk in the whites will cause the meringue to FAIL!  That is the gospel according to my Momma and she was right about that!! )
-Combine 1 cup of sugar with 1/3 cup of cornstarch and 2 cups of water in a medium sized saucepan.  Cook and stir over medium heat until the mixture is smooth and bubbly. This takes about 10 minutes  (A Momma tip:  start with cold water to avoid lumps in the filling caused by undissolved corn starch)
-Remove from heat and stir about 1/2 cup of the hot mixture into the egg yolks.  Then pour the yolk mixture back into the saucepan and stir until well blended.  Use low heat this time.
-Add 2 Tablespoons unsalted butter to the mixture and cook and stir for about 5 more minutes.
-Pour in lemon juice and zest and stir well.  Remove from heat and make the meringue. 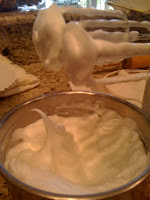 -In a small mixing bowl, combine the egg white with a pinch each of Cream of Tartar and salt. Use the highest speed of your electric mixer and beat the egg whites until frothy.
-Gradually add 1/4 cup sugar (granulated or powdered) and continue to beat on high speed until the egg whites are glossy and will hold stiff peaks when the beaters are removed.  This is very important.  An "underbeaten" meringue will "weep" as the pie cools.  (another Momma tip)

Assemble the Pie:
-Pour the warm filling into the prebaked crust. 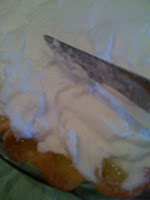 Finish:
-bake the pie for about 10 minutes or until the meringue is golden brown.  Allow the pie to cool and then place it in the refrigerator until serving time.

Enjoy and as you eat the pie, remember that it is a special dessert and is served as a special treat for special people! 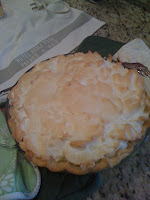