Showing posts from September, 2011
Show all

Can't Keep a Good Woman Down 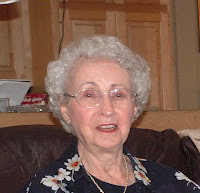 Elise was born on December 8, 1922 in Greensburg, Louisiana and died on September 12, 2011 at 3:45 a.m. in her “apartment” at Ollie Steele Burden Manor in Baton Rouge, Louisiana from complications after multiple strokes.  Elise saw much in her almost 89 years.  She was a Baptist and her last church membership was Emmanuel Baptist Church of Denham Springs where she was known as the “flower lady.” She grew beautiful roses and was quite accomplished at arranging them.  Every Sunday she would provide a beautiful arrangement for the pulpit.  She and her husband, Maxwell, Sr, raised their children in Baton Rouge, “retired” in Denham Springs, and before moving to Ollie Steele she lived 7 years at Lake Sherwood Village.  During her Denham Springs years, she and dad grew a huge garden.  Some of the grandchildren helped her with harvesting and the blueberries were the favorite crop!  That acreage is now the site of a small subdivision named after her.   She and my Dad eloped in 1938.  S
Read more 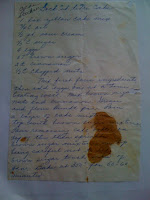 I was asked to bring a dessert to a football watching party this evening.  I immediately went to my collection of "old, but tried and true" recipes.  A few years ago, I got industrious and organized my favorites in an album with plastic sleeves to protect the original copies of cherished concoction secrets.  Many were already stained by spills, but were still readable.  In the dessert section, I found myself walking down memory lane because the recipes included the names of those who shared them with me. My mom was a great cook and never used convenience products.  I have a vivid memory of watching her "singe" a chicken over a gas flame to rid it of the pinfeathers missed during the plucking stage of preparation.  One of my siblings used to quip that she didn't know you could buy ready made cookies and cakes until she got married and started doing the grocery shopping for her family.  Our generation, however, has learned to embrace cake mixes and foods that ju
Read more
More posts