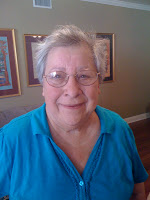 Today we attended my husband's Godmother's 80th birthday party.  Mary Ann McKearan was 80 on March 10, 2011.  We were honored to be included in the festivities and made the trip to Harahan, Louisiana with my husband's only sister at the wheel.  Mary Ann has a nickname of which she is not fond, but that's how I know her from her Godson.  It's "Aunt Dut" and lots of people call her by that name.  I would love to know the origin of her nickname, but no one seems to remember.  By any name she is a very young octogenarian and a beautiful person inside and out!  She and I share a birthday week, so it was fun to attend a grand celebration.

Aunt Dut is one of nine children born to Edmond and Hortense LeBlanc in Morganza, Louisiana.  Morganza is a village near Old River, near False River and near the Mississippi River in south Louisiana.  New Roads is the largest town near Morganza and it is also a small place.  In 1950, as a young woman, she left the small town on a bus by herself with less than $100 in her pocket and went to New Orleans.  Her bus was met by one of the nuns of the Sisters of Charity who ran the nursing school where she was to study and become a Registered Nurse.

While in school, she fell in love with George McKearan,  the brother of one of her classmates.  She married George and they had four children:  Pat, Kevin, Kathleen and Maureen.  George passed away several years ago.  After receiving her RN Degree she was employed by Ochsner Health System in the New Orleans area for  40+ years.  Retired now, she continues to lead an active life with 11 grandchildren and 2 great grandchildren who see her often.  I asked her daughter how Dut stays so young and her reply was: "activity."  Dut gardens, sews and loves to play cards.  She is a member of St. Rita of Cascia Catholic Church Altar Society and volunteers at the Senior Center in Jefferson Parish.  She also volunteers her time for the Jefferson Parish Performing Arts Society serving as an usher or doing whatever duties required of her.  She doesn't have time to be  old!  I think it's interesting that this octogenarian volunteers her time at the Senior Center helping the "old folks!"

Among the guests were four of her surviving siblings and she was delighted to see them all.  In the photo the brothers are John, Cleve and Jack.  Seated next to Aunt Dut is her sister, Barbara.  Another living brother, Ed, was too ill to attend.  The afternoon was spent eating some really good food prepared by her children and friends.  We young folks (I am 63!) were mesmerized by the stories of the old days in Morganza. 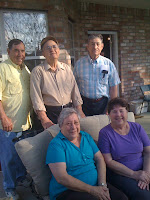 I learned that my now deceased father-in-law (married to Linda LeBlanc and known to us as our "Granny") became a town hero because he was able to extinguish a fire in the school attic.  While everyone else panicked and ran around hysterically he found a bucket, filled it with water, went to the attic and doused the flame.  One party guest who was a classmate confirmed that he was present that day and that the teacher wanted them to climb a banana tree to get to the fire.  He laughed as he retold the story, because according to him, one cannot climb a banana tree.

Not sure how my father-in-law got to the fire, but with one bucket of water and common sense he saved the day and the school house.   As the incident was remembered, we missed him and our beloved "Granny."  They both so loved parties!  The picture is of the Old Morganza High School which is still being used as an elementary school.

A recent tale was about another deceased sister, Milda.  She was the oldest sibling, a little opinionated, and had been a widow for many years when she  invited some of the brothers and their wives to spend the night with her.  The plan was to visit the New Orleans casinos  and have some fun gambling.  She warned them to return before 10 p.m. to avoid being locked out. Ten was her bedtime and she couldn't be waiting up later as it was not per her routine.

On their way back to Milda's house at about 9:45, they noticed that the donut shop had a red flashing light indicating hot pastries.  They stopped for some of those freshly cooked delicacies and were delayed for their "curfew" set by Milda.  She had locked them out.  They knocked and begged to enter.  She let them in with much scolding, but being the health nut that she was, she forbade them bringing the donuts into her house.  They are still laughing about that experience to this very day!   There were other stories, but this entry would be way too long if I recounted all the stories I heard.  Those LeBlancs (and their mates) really did and still do know how to have a good time! 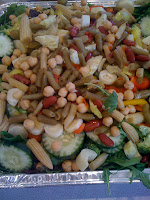 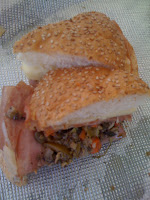 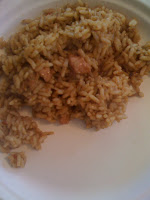 The cooks for the day really outdid themselves.  We dined on Marinated Cheese, Layered Mexican Dip, Muffaletta Sandwiches, Italian Spaghetti and Meatballs, assorted finger sandwiches, a salad that contained about 20 ingredients, veggies and dip, fresh fruit and a huge pot of Jambalaya cooked by one of Aunt Dut's son-in-laws.  The melding of various New Orleans cultures was evident in the varied cuisine. 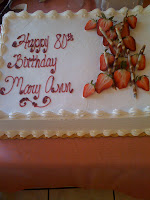 And then there was dessert.  A fresh Strawberry Cake was the main attraction.  It was adorned with candles and strawberries and white chocolate sticks. The strawberry filling and whipped cream icing were divine.  To add just a little more sweetness, someone also baked brownies.  And that's not all...I haven't even mentioned the nuts and mints and the wide array of ice cold beverages.  Needless to say,  "A Good Time Was Had By All!!" and no one left the party feeling hungry.

Hosting the soiree were all of Aunt Dut's children and her oldest son and daughter-in-law welcomed us to their home!  I am including a recipe that was prepared by the hostess, Shirley.  Her husband, Pat, is Aunt Dut's oldest son.  She confided to me that she got the recipe from the Internet  so here it is with the link.  It's Marinated Cheese.  This recipe originally appeared in Southern Living  magazine, but I don't know the date and issue.  I do want to credit the magazine for this luscious appetizer.  I like three things about this recipe:  1) Can be prepared ahead and refrigerated and 2) Looks very pretty and 3)  it tastes wonderful!  It's a real crowd pleaser.  I hope you will try it! 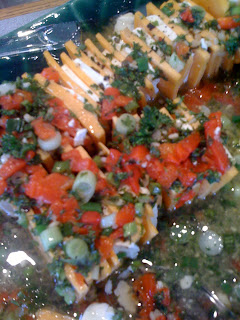 1. Cut cheeses into 1/4 inch slices and then cut them into small squares of the same dimension.
2. On a small dish with a rim, stand the cheese slices on end alternating cheddar and cream cheese.
3. Combine remaining ingredients to make a marinade.  Pour this sauce over the cheese and marinate in the refrigerator until ready to serve.
4.  Serve with crackers of choice and enjoy.

Did I mention that I am so lucky to to have married into this family 43 years ago?  The family ties are so strong that it is remarkable.  Happy Birthday, Aunt Dut!  May you have many more and may you continued to be richly blessed with family, friends and good health.
jambalaya Louisiana marinated cheese Morganza muffaletta New Roads Ochsner Health Center St. Rita of Cascia Catholic Church