Smiley Anders was the guest speaker at the Woman's Hospital Auxiliary luncheon today.  Woman's Hospital is one of the largest women’s specialty hospitals in the United States and is recognized throughout the country for its innovative programs for women and their families. Most of the babies born in Baton Rouge are born at Woman's.  It's a nonprofit hospital and the Auxiliary lends support in volunteer hours and fund raising.  I have met many wonderful people through volunteering and I have felt the work to be very rewarding.  You can find out more about Woman's and the numerous ways it serves the community at http://www.womans.org/.  There are many ways to support the hospital.  (http://www.womans.org/giving_opportunities)   How rewarding to further the health and well-being of women and children of the community!  Every gift, whether time or money, is so much appreciated.

For those of you in the Baton Rouge area, Smiley Anders needs no introduction.  He has been writing an award winning human interest column six days a week in The Advocate (http://www.2theadvocate.com/) since 1979.  Many of his readers are very dedicated.  He told us that one lady told him that she reads the obituaries first, and then his column on a daily basis.  His column is on the first page of the second section so his readers don't have to search for it. Years ago the newspaper changed its format and Smiley's column had to be "continued" on a second page. The public outcry was enormous.  The very idea of having to turn the page to read Smiley! Smiley's column is sure to bring a smile (pun intended) to those who read it.

Smiley will admit that he doesn't really write the column, because his readers supply him with bits of trivia, humor, notes of thanks for acts of kindness and notices of events that are for good causes.  He wishes happy birthdays to those who reach 90 years of age.  He used to mention those who were 80, but had to quit because of the longevity of his readers and there were too many to mention!

He is an avid LSU Tiger Fan.  He has written many columns where he made fun of former longtime rivals of LSU, The Texas Aggies.  Today he showed us a gift given to him  when he was invited to speak to an Aggie Alumni group meeting.  It was a trophy in the shape of the "south end of a northbound horse."  He told the volunteers in the audience, that if you give it out, then you should be able to take it, too!  Smiley can be contacted by emailing him at smiley@theadvocate.com.  If you have something for his column he would appreciate hearing from you. 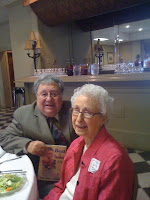 I took my mom to the luncheon today.  She loves Smiley and his column and wanted to meet him.  It was so much fun having her with me.  I was proud to introduce her to my fellow volunteers.  She and Smiley posed for a snapshot.

Smiley told us that he is amazed at the good will of the people who contact him with information for his column.  He cited one example where his readers showered a small girl with get well cards when she had to be hospitalized. Smiley had mentioned the child in his column and asked the readers to send the cards.  The mother reported that the entire hospital room had been papered with cards and flowers and stuffed animals as a result of his request.

Because of the popularity of his column, Smiley has written a book, The Best of Smiley. The book contains snippets from his best columns over the years.   I found it on Amazon.com and http://www.authorhouse.com./ He had copies of the book at the luncheon today and folks were lined up for book signing.  It contains bits of wisdom and humor from his daily ruminations.  In his talk today, he shared his personal mantra with us.  "Practice senseless acts of kindness and random acts of charity."  Good advice for Woman's Hospital Auxiliary members and for all of us.
Smiley Anders The Advocate Woman's Hospital