March 03, 2010
When my mother-in-law went to her final resting place a few years ago we inherited a platform rocking chair from her home.  This chair had a history and special meaning to my husband as it was purchased when he was a small child.  Over the years it had been many colors and had been in several spots in several houses, but it has found a place in our new home in Zachary.  I was interested to know about platform rockers and found on the Internet that "platform rockers had been patented and were in production by the late eighteen and early nineteen-hundreds. Some owners thought the platform rocker to be superior to the ordinary rocking chair because most rockers were considered hard to place near walls." (http://www.designboom.)/  You can rock in this type chair all day and it will not travel across the room as a traditional rocking chair tends to do.

In the process of downsizing this year, we had decisions to make on which pieces of furniture to toss, donate or sell.  There was never a question about Granny's Platform Rocker.  We would select a place for it and call in a upholsterer to update it for our new surroundings.

Upon the recommendation of a friend, we called Ron Green's Upholstery.  Ron came to the house and gave me some advice on fabric selection and style of the updating we wanted.  I was lucky enough to hit the sale at P-Tree Textiles in Baton Rouge for a beautiful gold colored chenille.  I felt the texture of the fabric would lend a retro look to the rocker.  The photo is Ron and the chair.

We decided against having the wood refinished as my husband was sure that some of the imperfections were due to his teething on the wood arms of the chair when he was an infant.  So nostalgic of him!  Also I wanted to feel that I was placing my hands on the same wood as Granny when she rocked her children and grandchildren.  We felt that sanding and restaining the wood would eradicate those memories.  We are not sure of the age of the chair, but my husband is old enough for Medicare.  You do the math.

Ron delivered the chair today.  I was impressed when he explained that he had to remove at least three layers of old fabric including a layer of naugahyde.  Remember that from the 50's?  Each layer must have had a story.  I believe that Granny felt it was worth saving this chair, just as we had.  He also added some padding to the seat and back cushions.  Trimming out with welted cording gave it a classy touch.  We opted against a trim cording so he used tacks instead.  I highly recommend Ron if you need something reupholstered.  He was prompt and gave us a very reasonable price for his skilled craftsmanship.  He also refinishes wood furniture and I have seen some of that work as well.  He is a top-notch artist at his work! He takes pride in each project.  We trusted him with our keepsake. 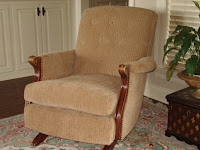 I normally don't place a lot of value on things, but this chair has great Karma for us.  We have given it a place of honor in our den and have great plans for it in the near future.  Our beautiful daughter and son-in-law are presenting us with a grandchild later this year.  Granny would be so proud to have her great grandchild rocked in her chair.
P-Tree Textiles platform rocker Ron Green's Upholstery