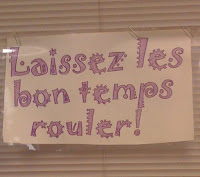 My daughter, Gretchen, is a French teacher in a middle school.  Her 6th grade students celebrate Mardi Gras with a fete to mark the day.  Of course it is not the actual day, since that is a school holiday in Louisiana, but the last day before the four day weekend common in the state.  For those of you who don't know, Mardi Gras is a very big deal down here in the deep south.  Mardi Gras has been celebrated in New Orleans since the late 1600's, and Louisiana does it best, in my opinion. The French Settlers along the Mississippi River were the first revelers.
Mardi Gras is actually a religious holiday, but it has melded into one big party for many people.  The season begins on the Epiphany (January 6th-12th Night) each year and culminates on Fat Tuesday.  The rich French heritage in Louisiana lends to the authenticity of having a Mardi Gras fete in a middle school classroom.
The lesson plan went like this:  Each student completed a "Bellringer" exercise as the class assembled and settled into their desks.  They were asked in writing and in French:  What is the meaning of Mardi Gras? 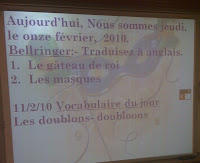 What is the French phrase meaning King Cake?  What is a doubloon?  As an observer, I was impressed that the students could answer each of these inquiries.  I learned that Mardi Gras means "fat Tuesday" before the beginning of Lent.  Gateau de Roi is French for King Cake.  A doubloon is a coin often thrown from a parade float to those standing on the streets as the parade rolls by.  The doubloon is imprinted with the name of the Krewe hosting the parade.  It was impressive that Gretchen doesn't have to write on the chalkboard in this classroom.  The exercise was written on her computer and projected to a Promethean Board.  Very fancy new technology, I think! 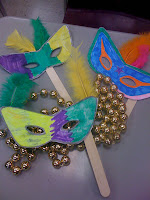 The major activity of the day was for each student to craft his/her own Mask for Carnival.  A mask is part of the tradition because when wearing a mask a person can be anonymous and completely carefree.  Students were given patterns, markers, crayons, glue, craft sticks and feathers to work their artistic magic.  My role was to be the "hot glue" person.  I was able to converse with each child as he/she brought his mask for glue.  I found them charming and a pleasure to get to know.  To lend to the party atmosphere while the masks were constructed, there was Mardi Music playing in the background. 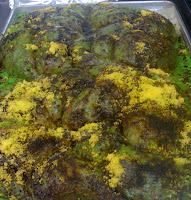 There was also King Cake that had been prepared by the school cafeteria.  Miss Gail had outdone herself with these.  They were fresh from the oven and huge.  Everyone had as much as they liked.  The cakes were cinnamon filled yeast bread topped with enormous amounts of colored frostings of gold, green and purple.  What's not to like?  Students were also treated to colorful beads which they were allowed to wear at school all day. The middle school students were very respectful and appreciative of the activities that were planned for them.  What a fun day!
Thanks, Gretchen, for allowing me to be part of the Middle School Mardi Gras!
King Cake Mardi Gras Promethean Board