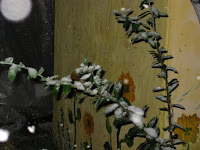 The weather forecaster mentioned the possibility of snow. The mention of the “s” word was met with much skepticism since the current temperature was 65 degrees F and there were no clouds in the sky. It was a sunny, cool, crisp morning. The daily news emails also mentioned the possibility, but no one took it seriously. The morning of the so called “snow day” the city parish government postponed the lighting of Christmas lights in the downtown area. Businesses closed early to get folks off the road. The sky began to blacken and low and behold, it began to rain.

I had decided to spend the afternoon shopping at the mall. Not unlike the Post Office, the snow would not dampen or thwart my plans. Those forecasters, in my opinion were way off base. Boy, was I wrong!

Exhausted from an afternoon of shopping, I left the mall loaded down with packages and unaware of the emergency situation caused by the possibility of bad weather. I was in denial.  I still didn’t believe the forecast. Baton Rouge did have one day of snow last year in December, but that was viewed as a phenomenon that would not repeat. For those of you who are not from the South, I must point out that snow brings on panic in otherwise normal, calm Southerners. There are traffic snarls and parents pick their kids up early from school. Everyone is on the road at the same time. Grocery stores become populated by those who are afraid that the bad weather will knock out power and are stocking up on food that doesn’t need cooking. We are survivors of hurricanes and we know what to do! We get our junk food and hunker down for the worst. Then once home in the safety of our own dwellings, we wait.

The six o’clock news was still forecasting snow…not one flake had been spotted. The temperature had dropped to freezing and it was really nasty outside. I kept going in and out of the house to assess the situation. You may think this is bizarre behavior since most would try to stay in and keep warm, but I didn’t want to miss any of the small beautiful flakes that were promised. My FB friends were writing on their status updates that it was snowing at their houses. I was jealous. 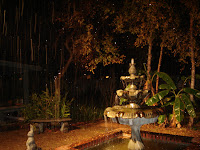 Finally at 9:30 pm, as from the den we were watching our patio, we saw the miraculous frozen precipitation. It snowed for about an hour. Of course we were out taking snapshots to capture the moment. I don’t know if I was trying to prove that it really happened or to make a memory. Both, I suppose.

The photo of the fountain is mine and the others are  by Jeanne Webre Lamy, who has a talent for such. Thanks, Jeanne, for getting these great shots of our once a year snow and for allowing me to post them!