The area we visited this time is called "The Northshore" because of the
proximity to  Lake Pontchartrain and New Orleans.  The Weekday Rambler and her husband ventured to Covington, Louisiana and the Blue Willow Bed and Breakfast. On this one we made a reservation a week in advance via the internet and some telephone calls. We discovered the Blue Willow (http://www.bluewillowbandb.com/)  by perusing its rather extensive website and it proved to be as charming and inviting as the internet pictures had shown.
We arrived on a Tuesday. The Blue Willow is located in old downtown Covington one block south of the main drag of Business 190 a.k.a. E. Boston Street. Nearby are other “be & bees,” quaint shops, art galleries, and restaurants.
The gardens and ambience of the historic district of downtown Covington give it the feel of times past. Maureen and Tom Chambless are the proprietors of the Blue Willow and their personal touches were evident in the design and décor. It was apparent that much hard work and love went into creating this special place.
We were assigned to the Orleans suite and upon entering were greeted with soft and romantic Rod Stewart music playing on a CD player. Our lodging included a king sized four poster bed, a kitchenette, a sitting area, a porch balcony and a bathroom complete with a whirlpool tub and separate shower.
Upon getting settled, one thing that stood out was the fact that the entire suite was well lit. Ceiling fans and wall sconces added to the charm of the spaces. There was enough lighting in the bathroom so that you could actually see your face when getting dressed in the morning! (Ladies will appreciate that!) 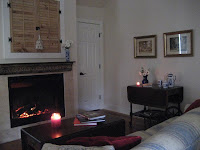 The remote control fireplace was a surprise and added to the romance of the sitting area. Above the fireplace were shutters that when opened revealed a television/DVD. There was even a selection of old movies to watch if one so desired. Who wouldn’t enjoy Hepburn/Grant in “Charades” again!
The Chamblesses thought of lots of extras to make us feel welcome. Maureen is an accomplished baker and the coffee cakes and muffins were delicious. We think they were supposed to be eaten for breakfast, but we made some coffee, sat on the porch and enjoyed pound cake and croissants in the afternoon. In addition there was fresh fruit, juices, milk, cereal, coffee, chocolate and popcorn. There is no reason to go hungry at the Blue Willow. There was a small placard that warned that “diets are for home” and that guests should enjoy the food that was placed there.

As mentioned, within walking distance of the Blue Willow are numerous shops and restaurants. Some of the restaurants have been opened within the last couple of years by chefs who made their reputations in preKatrina New Orleans. Being able to walk to a restaurant is a treat, since parking is not an issue. Grocery/spirits shopping is nearby for dine-in supplies or a late afternoon chardonnay enjoyed on the porch back at the Blue Willow. 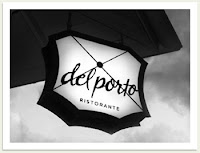 At sunset we strolled to Del Porto Ristorante (northern Italian cuisine) for dinner.  Del Porto has been named by NOLA as one of the top ten restaurants in the New Orleans/North Shore area of Louisiana.  The food was divine and the service was top rate!  Covington shopping ranges from boutiques, antiques and art galleries. The “old tyme” hardware store, guns and knives and wood carving shops are appealing to the guys. People watching is fun with the mixture of friendly locals and transplanted “Y’ats.”

Since Covington is only a few miles from Mandeville, Madisonville and Abita Springs we spent one afternoon exploring these as well.  We enjoyed A Broken Egg in Mandeville for breakfast.  Lunch was in Madisonville on the banks of the Tchefuncte (che-funk-cha) River at  Friends Coastal Restaurant (http://www.friendscoastal.com/) The menu boasts fresh seafood and we tried the Shrimp Ceviche.  It was the best rendition of this dish that I have ever tasted.  The presentation in a large martini glass was impressive because the colors of the ingredients could show through.  Abita Springs is the home of the beer that is famous for its flavored varieties using Louisiana ingredients. A well known brand is Purple Haze.  Mandeville is a very old town (dates to 1834) that was once a steamboat port for travel across Lake Pontchartrain  to New Orleans. Each of these destinations has its own unique history and selections of good food, scenery, boating and fishing and golf courses...but that’s another story.
Abita Springs Blue Willow Bed and Breakfast Del Porto Friends Coastal Restaurant Madisonville Mandeville Northshore