The Grand Dame of the Great River Road

December 16, 2009
My friend, Sandra,  invited Candy, Beverly and me to join her for a day at Oak Alley Plantation in Vacherie, Louisiana.  It has rained for 6 days, but today we were blessed to have a beautiful, cold, crisp day for our outing.  Sandra's van was filled with chattering ladies for the 30 minute drive necessary to reach the other side of the Mississippi and River Road. We continued to talk and laugh the way women do when out for a day of fun, until we reached our destination. As we approached and saw the beautiful grounds framing the old house we became speechless. It was a beautiful site and we had to stop and take in the grandeur we were about to explore.

Oak Alley is a magnificent example of the antebellum Greek Revial architecture made famous in the South.  The name comes from the 1/4 mile long corrider of majestic live oaks that shade the front lawn.  The oaks are thought to be about 300 years old.  The house was constructed in 1837 by the creole Roman family from New Orleans.   It's about 30 miles from Baton Rouge and about the same distance from New Orleans.

In 1850 it is said that two thirds of the nation's millionaires lived in the plantation homes along the Mississippi.  Cotton and sugar were the main crops grown with the aid of slave labor.  It was truly a time of grandeur if you were not a slave.  Much has been written and said about the effects of slavery in our country, but the tour guide at Oak Alley insists that the slaves were well treated there. (I am not sure if that is accurate since slavery was not moral!) .  There were hundreds of plantations dotting both sides of the river.  Only a few remain, most having been taken by fire, neglect or demolition during and since the Civil War.

Oak Alley came into disrepair after the Civil War when the family became unable to keep it running as a productive sugar plantation.  Creditors sold the building and all the contents at auction.  Only one piece of furniture was salvaged because it was being used by a relative at the time of the auction.  That piece, an intricately carved cradle, has since been returned to the site.

Several families eventually lived there and in 1925 Oak Alley was purchased by the Andrew Stewart Family. They installed electricity and bathrooms and  family members lived in it until 1972 when the 93 year old Josephine Stewart died there.  In her will, Josephine  created the Oak Alley Foundation to ensure that the 25 acre site would be cared for and visited by generations of tourists.  Mrs. Stewart's great nephew is the head of the foundation that runs the business today.  The home has been furnished with replicas of furniture that may have been part of the original decor.  Some of the original cypress and marble remain.  Photography is not allowed inside the home, but there are some excellent photos of the interior at the official web site: http://www.oakalleyplantation.com/

There is a restaurant on the grounds and we sampled the gumbo, potato salad and some delicious Pecan Praline Coffee.  There were two types of gumbo.  The one I had was made with shrimp, smothered okra and tomatoes in a light roux.  The others had the chicken and andouille sausage variety.  Both were delicious.  Since it is a Creole tradition to eat a side of mayonnaise potato salad with gumbo, we tried that as well.  It was a very traditional rendition and pretty good!  The pecan praline coffee was a cappuccino topped with whipped cream and was a superb dessert.  There were also po-boys and fried seafood on the menu.  Fried alligator could be ordered, but that is not a traditional food for plantation life, so we passed on that.

We also spent a good bit of time in the gift shop.  There we found a nice collection of antique glassware including Fenton, Carnival glass, and vintage china serving pieces.  Some estate and vintage jewelry as well as modern pieces, graced the  sales counter in the center of the store.  Pecan pralines and mint syrup (for making mint juleps) are culinary delights they have for sale. (had to have some of each!  Yum!)

You can also purchase a fly-catcher of the type that was used on plantation dinner tables to attract insects and prevent them from biting the diners!  You must remember that in antebellum times there were no air conditioners and no screens on the windows, so flies and other insects came in at will.  A "courting candlestick" is also a unique item that can be purchased in the gift shop. This piece was a twisted piece of metal that wrapped around a candle.  When the candle burned to the level of the first twist, it was time for a courting lad to leave!  A good selection of books about the South and regional cook books rounded out the offerings.

Oak Alley has been featured in many movies and television shows.  I can still remember that Hope and Beau from "Days of Our Lives" soap opera were married there.  The movie, Hush, Hush Sweet Charlotte was filmed there.  If you don't remember that one, it's worth renting. Bette Davis, Olivia de Havilland and Joseph Cotten star and it will scare the daylights out of you!  More recently, Interview with a Vampire and Beyoncé's "Déjà Vu" Music Video were filmed there.  My favorite, of the films made there, is The Long Hot Summer with Paul Newman and Joanne Woodward.  It's classic Paul Newman.  (Weekday Rambler swoons) 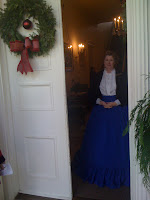 Today Oak Alley was decorated in period style for Christmas.  The abundance of cedar garlands and cinnamon scented candles made it feel like the holidays.  Our tour guide was well versed and gave us an enormous amount of information on the house, its inhabitants and the history of the time.  We found out that she was also from Baton Rouge and had gone to the same high school as Sandra, Candy and Beverly.  I have stated in an earlier post that our world is very small and this just proves it!  Who would have thought of all the tour guides, that we would get one who was an alum of Redemptorist High School in Baton Rouge!!

As we returned to Baton Rouge after our lovely day, I couldn't help but be very thankful that I was invited to share the experience with friends.  I felt so blessed to be included.
Antebellum LA Oak Alley Vacherie