Christmas in the Back Yard

December 27, 2009
The Christmas Cactus plants bloomed today!  When my mom downsized her life and abode I inherited the huge plant from her former home.  As the recipient of this prized specimen I was determined to keep it alive in hopes of the promised annual blossoms.  That was five years ago.  The plant has been separated many times by my husband who has the "green thumb" of the family.  We now have eight pots of the hearty bush on our patio. 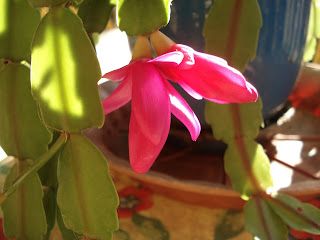 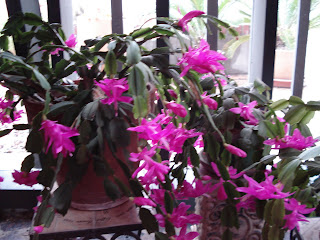 Internet research reveals that the Christmas Cactus is not really a cactus, but a succulent requiring a dry soil, moderate temperatures and blooms in late November and early December. It got its name from the flat stems that have a slight sticker on the end of each frond.   Supposedly the species was discovered by a 19th century Frenchman who was visiting Brazil.  The scientific name is Schlumbergera bridesii.  Legend has it that since traditional Christmas trees such as spruce and fir do not grow well in tropical climates, that people began to decorate this plant at Christmas time instead of purchasing an imported tree.  This plant is a real champ.  We rarely water the pots, and each segment can be separated and stuck into the ground where it will grow and thrive into blossoms.  It's almost magical to see the progress through the year.

Some years the plant blossoms in time for Thanksgiving, but this year it was Christmas day for the first blossoms.  The cacti have become a prized possession.  I hope to hand them down from person to person like a valued  family heirloom.

Outside in the yard is another surprise.  The Camellia Japonica (scientific name) is in full bloom.  We planted this shrubbery about 10 years ago and have watched it grow from a 12 inch tall plant into a bush about 6 feet tall.  This year we were treated to full bloom of the delicate flowers. 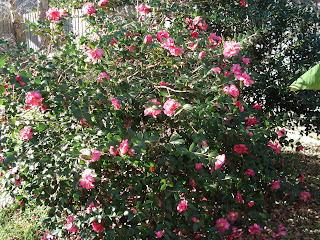 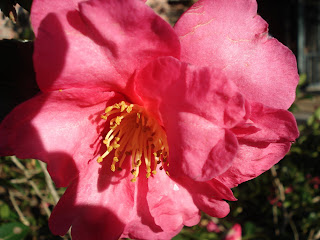 Camellias are used for hedges in the South, since they are evergreen in subtropical climates.  Some bloom with the first cold snap.  This year ours waited until the week before Christmas to show their blossoms.  Camellias were named to honor George Kamel, a Jesuit missionary, who studied and propagated them in the Phillipines and southern parts of Asia.  Some people take great joy in grafting different varieties to produce unusual colors and patterns in the blossoms.  There is actually a Camellia Club in Baton Rouge where growers showcase the most beautiful ones they have grown.  As for us, we ignore ours totally and they bloom in profusion each year.  We consider them a gift that pleases and surprises us in our own backyard.  Enjoy the photos.