November 29, 2009
We normally take one big trip each year. This past summer we booked a Tauck Tour of the Grand Tetons and Yellowstone. We like this tour company because you write one check and it’s all taken care of for you. No big decisions left to make except what to order at the restaurants along the way. We joined a group of about 30 people for our “tour”.  By the end of the twelve days we would be great friends.

The adventure began with an uneventful (our luggage was not lost and there were no delays) flight to Salt Lake City. Having never been there, we were curious to see the town. Our hotel was in close proximity to Temple Square, so we walked there. The Mormons are very proud of their properties. All of the properties are staffed by volunteers who are doing their required church service. The place is fascinating and we had a guided tour of the site. No money has been spared for the buildings. It’s a very holy place in their religion and many young people flock there to get married. We saw no less than 6 wedding parties in the two days we were in Salt Lake.

It was a real treat to attend a rehearsal of the Mormon Tabernacle Choir. The Air Force Band was performing with them. It was to be a Memorial Day radio broadcast. When we entered the free event I gasped at the sheer beauty of the place and the sound. Suffice it to say, it was magnificent and I will never forget it. 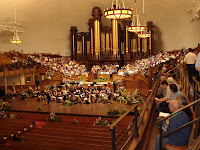 We entered the Family History Library out of curiosity and ended up spending the greater part of a morning researching our own families in the vast data bases accessible there for free. If I ever need another hobby, I may get into genealogy. It’s fascinating. I found out that my grandfather was named after Theodore Roosevelt and that my mother had a brother whose real name she never heard.

Contrary to what some may say, modern day Mormons do not practice polygamy. We did, however, tour the home of Brigham Young who had lots of families! What we found is that they are a very devout people with strong beliefs.
Salt Lake City is not a place for those who enjoy drinking alcohol. It’s dry. The only way to drink wine, beer or hard liquor is to be a “member of a club”. We found out that our hotel was considered a “club” so we were able to have a cocktail in the evening.

Day three found us in Utah for breakfast, Idaho for lunch and Wyoming for dinner. We spent some time in famous Jackson Hole and spent the next couple of nights in Lake Jackson Lodge right in the middle of the Grand Teton National Park. The view from the lodge dining room was spectacular and we were able to see some deer, a bear and some wolves. I kept pinching myself to see if the view was real or a dream.
Rafting the Snake River was a highlight. I use the word, rafting, but in reality it was a pleasant float trip down the river. The tour folks had us very scared of getting wet and drowning. We were made to don serious life jackets and wear raincoats. In truth, no one got wet. What we did do is see beautiful waterfowl and amazing landscapes on our 2 hour float. 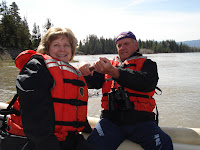 The picture at the top of my blog is Lake Jackson. I am not a good photographer, and my photo does not do it justice, but the mirror image of the mountains was worth trying to capture.

The next several days were spent touring Yellowstone National Park, home of Old Faithful. We felt really special since our hotel room overlooked the most famous geyser in the world! Old Faithful Inn is a grand old place with distinctive old style architecture. The inn has been restored to its former rustic grandeur and was in itself an attraction worth seeing.

On another day we were in the other side of the park in the Lake Yellowstone Hotel. This grand old place featured a view of the lake (thus the name and the paint color) and had a sun room that featured live piano music during the cocktail hour that, by the way, starts early on vacation. 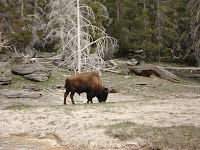 Yellowstone is a geothermal world that did not disappoint. The eruptions were surprising even though the geologists are able to predict the times with some accuracy. The fumaroles, bubbling mud pots and steaming waters were foreign to this Louisiana lowlander. I have seen the Grand Canyon but was equally impressed by the Grand Canyon of Yellowstone.

I have to mention that the buffalo, or bison, roam freely out west.  We saw our first ones when traveling through Idaho and were so excited to see them.  After several days we became accustomed to  the seemingly gentle giants, but were warned not to get too close.  In the geyser area they got very close to us.  I was very careful to give them their space. 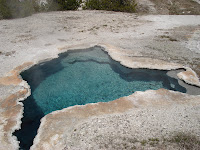 My husband wore his LSU hat and shirt on many days of the trip. We were very surprised when hiking to view a geyser to hear someone chanting: “Geaux Tigers! LSU, LSU”!! A fellow LSU alum was in Yellowstone with us! The LSU clothes gave us away as Tiger Fans. This also happened to us in Florence, Italy the year before…but that’s another story. The world is too small!

The rest of the tour included visits to the Buffalo Bill Historical Center and a Wild West show in Cody. Also on the itinerary were Crazy Horse Monument and Mount Rushmore.  Every American should see Mount Rushmore. We took a snapshot to show the enormity of it. Everything seems big and open in the American West. We ended our touring with an overnight stay at a dude ranch. We skipped the horseback riding to enjoy a relaxing afternoon on the patio of our private cottage.  Rapid City was our departure city and we were sad to end our adventure. 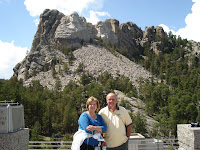 Our memories of our “2009” big trip will stay with us for a long time. We were lucky to meet some super people (even if some were Florida fans) and have also been lucky to hear from Edie, Dan, Barry, Susan, Shirley, Bill, Shelley and Tony during the fall via Facebook and emails. Miss you guys, but Yay for technology to keep in touch.   Kindred spirits, all!
Crazy Horse Grand Tetons Mount Rushmore Salt Lake City Tauck Yellowstone National Park